The Copper Kettle Restaurant in Regina has over 43 options on their pizza menu to help you create the perfect pie. Try one of our gourmet pizzas such as Taco, Hawaiian BBQ Chicken, and Irish Pizza. Our pizzas come in 13” to 18” sizes.

If you have a menu you’d like to submit send it to glutenfreeregina@gmail.com Read more about gluten free products, places to shop, gluten free recipes or check out more on our blog. Do you have recipes using Borage? Send them to us!

Beer Brothers Has Tempura Onion Rings And They Are Awesome!

Being gluten free is hard when it comes to fried foods. One of the hardest thing to find is gluten free Onion Rings done in a gluten free fryer. Well, Beer Brothers has done it! They have introduced a gluten free light tempura Onion Ring to their menu drizzled with a creamy dill sauce and they are Fantastic!

These will satisfy your Onion Ring craving! You have to eat them all (which shouldn’t be hard) because they don’t do well in the fridge over night! Beer Brothers is located at 1821 Scarth Street, Regina Saskatchewan (map) | Phone: 306-586-2337

If you have a menu you’d like to submit send it to glutenfreeregina@gmail.com 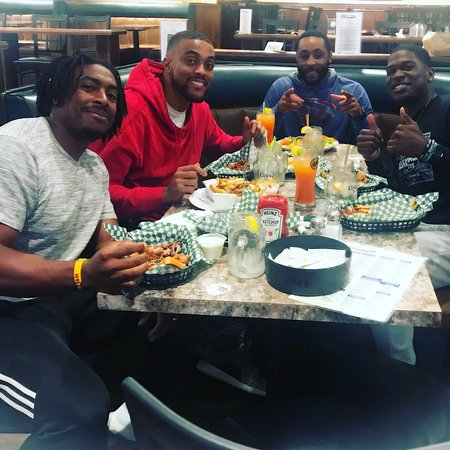 4 seasons offers both family dining, fundraiser and a sports bar atmosphere with an extra bonus of a beer store.

Regina’s Premier SportsBar, the SportsPalace is your destination to enjoy all the sports you can handle while enjoying some of Regina’s best pizza, appy’s and platters. On our huge video wall you can catch the latest Rider and CFL Action, all the NHL action with Center Ice, all the baseball action with Extra Innings, all the NFL action with Sunday Ticket and all the UFC PPV action. Our motto is NO COVER EVER and that means you never pay a cover charge to see thousands of games. We also have Karaoke every Friday with Ruda from 9pm till closing. And if you like playing pool, or foosball or beer pong, we have 2 tables of each in our sports palace. Simply the best tables around. Diamond Pool Tables and Tornado Foosball Tables.

4Seasons fundraisers are the ideal way for your group, team or organization to raise much needed funds.  All you have to do is pick one of our 5 fabulous food choices, select your date and determine your ticket price.  We handle everything else.
Our 5 fundraiser night food selections are as follows:
Steak Fundraiser Night – your guests will enjoy a delicious 6oz New York steak, roast potatoes, sautéed mushrooms. Every steak is made to order (not all medium and precooked) and served to your guests. 15.00 per person.
Pizza, Pasta, and Caesar Salad Buffet Fundraiser Night – your guests will enjoy an assortment of our tasty 4Seasons pizza ( spinach & feta, pepperoni, ham & pineapple, cheese) plus two pasta dishes (baked lasagna, parmesan garlic fettuccini) and Caesar salad. Your guest can help themselves as often as they like to the buffet! 14 00 per person.
Chicken’n’Rib Fundraiser Night – your guests will enjoy a delicious combination of a ¼ chicken and ribs, Caesar salad, served on a bed of rice and garlic toast. When your guests are ready to enjoy their fabulous meal, they just make their way to the restaurant buffet are where our kitchen servers will be pleased to plate their meal. 14.00 per person.
Roast Beef Dinner Fundraiser Night – our latest menu selection, your guests will enjoy a traditional 8oz roast beef dinner with mashed potato, gravy ( on the side if your guests prefer) and side Caesar salad. This delicious meal will be served to your guests. 14.00 per person.
Burger Fundraiser Night – your guests will enjoy a 5 oz steak burger and will be able to top it with a huge toppings bar. Also included is all you can eat homecut fries and Caesar salad. 13.00 per person.
Included with every meal is your choice of a 12oz District Brewing pilsner or complimentary coffee or pop.
We host our events every night of the week. Next select one of our five meal selections for your night. Finally indicate what price you will be selling your tickets. You can charge whatever you like ( typical $20 to $25).  We encourage your group to have silent and live auctions and 50/50 draws to make your event even more profitable. Once you select your date and pick up your tickets, a $100 deposit is required. This deposit will be applied toward your event, however in the event you cancel your fundraiser night or your guaranteed number is less than 50, the deposit is non-refundable.
4Seasons handles all the details from printing the tickets, preparing the amazing meal and offering tremendous service to your guests. At 4Seasons we can accommodate families with minors in our restaurant and of course, all our adult guests can enjoy their meal in the sports palace. Lets get started by filling the following online form or by calling Chef George Pile, our foodservices manager at 306.525.8338 ext 3, cell 306.209.8569 or via email chefgeorge@sasktel.net.

This was recently sent to glutenfreeregina@gmail.com

If you have a menu you’d like to submit send it to glutenfreeregina@gmail.com 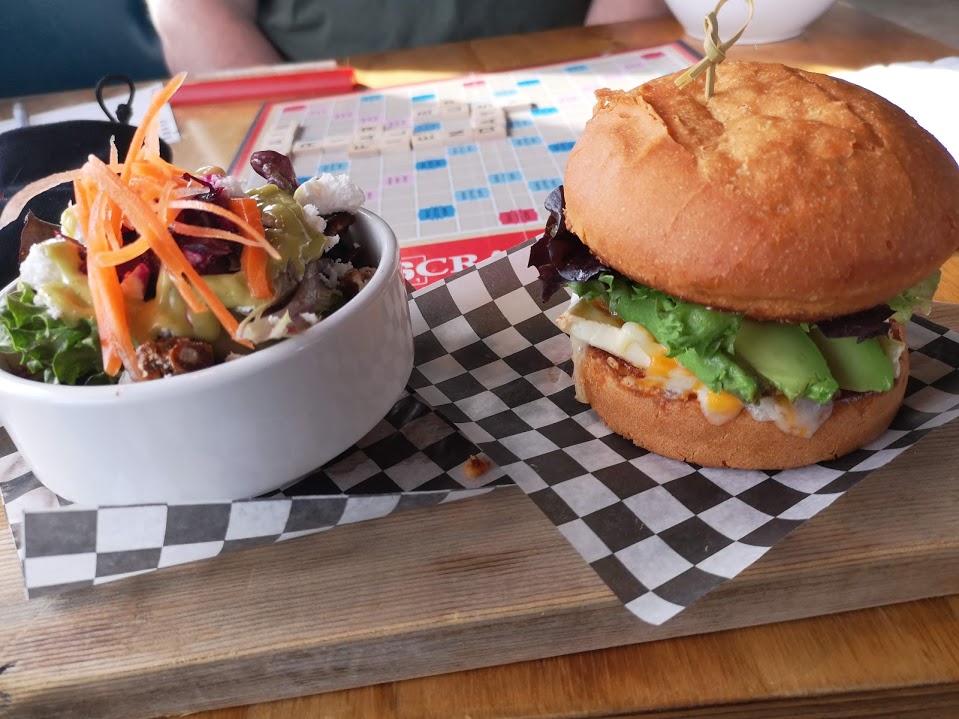 “The bar and the restaurant is kind of the centre of a small town and we just thought we could make a cool place where people want to hang out,” said Kali. “We just thought it had a lot of potential.”

IF YOU WOULD LIKE TO LEARN ABOUT MORE PLACES TO SHOP\

YOU MAY HAVE SOME QUESTIONS WE CAN ANSWER

The Meating Room isn’t just about meat and it has gluten-free options!

We asked what their Gluten Free options are:

Our grilled portobello mushrooms, smoked tofu, and grilled veggies are all gluten free; only the falafel is not at this time. Our rice bowls are gluten free so you may add any of the above as a protein. You may also add them to a salad, gluten free pizza or our baked fries Poutine. We have a sauce list that indicates which are gluten free/vegan to help guide you as well!
For Meat: All four of our meat proteins are gluten free.

Best little coffeehouse north of the Pecos! By the university, we are eclectic, cool, friendly and fun. Peace. Love. Coffee.

“Stone’s Throw Coffee Collective always has gluten free baking (cupcakes, brownies, granola bars, energy pucks, cookies). We also have Joe’s European Deli & Catering GF bread as an alternative so can make any of our sandwiches or paninis gluten free. We always have mini quiche (unless sold out!) and at least one, usually two, GF salads in our mix (currently a lentil salad, soon to come a rice bowl). Thanks ”

Welcome to The Canadian Brewhouse

Where you feel right at home because our house is your house!

The Canadian Brewhouse opened it’s the first restaurant in 2002, in Edmonton, Alberta. Over a decade later, that one location has grown to 31 and we plan to continue expanding across Canada!

Whether you are at a Canadian Brewhouse, or a Canadian Brewhouse & Grill, our one-of-a-kind Canadian themed restaurant & sports bar has an extensive menu of appetizers, entrees, drinks and amazing specials every night of the week. Plus we have our brunch menu every Saturday, Sunday, and holiday until 4 pm, and we offer special feature menus every season.

When you come to The Canadian Brewhouse, you’ll feel like you’re right at home because our house is your house…only we have way more TVs! That’s right, you won’t find a better selection of screens for watching the sports you love anywhere else! We even provide tabletop speakers for those nights when multiple sports and teams are playing.

Being an active part of our community is another important part of The Canadian Brewhouse culture and we give back in as many ways as possible. We are often fundraising for charities like The Stollery Children’s Hospital Foundation, The Canadian Cancer Society, The MS Society, SCITCS, and many local initiatives that are important to the individual neighborhoods we are located in. To learn about fundraising opportunities for your program, click here.

If you love sports, great food, awesome drinks, and having fun, then grab your crew and meet the Brew Crew down at our house any day of the week.

The menu including Gluten Free options

“Almost everything is gluten free on that menu at 20ten, or can be modified to be gluten free. We try to cater to go as much as we can. All our soups are GF, our creme brulee is…and soon our cheesecakes will be too.

It’s not what’s on your plate,
it’s what’s in your food.

Our mission is to make lives better by allowing people to enjoy the benefits of eating healthy, without compromising on taste. Our food is deliciously grilled, baked, or steamed to perfection and cooked with only the highest quality ingredients.

Eat Clean does meal prep orders to plan for your upcoming week. They have 10,20,30,60 meal packages to help you stay on track and make your life more convenient.

They also have a restaurant front and express food for lunches and suppers.

No cook or cleaning dishes let us take away the hassle of preparing foods for the week.

For other gluten free options see our family restaurants,  19+, Fine Dining, Coffee & Desserts or our Fast Food listings, or maybe you’re looking for a food truck.

Affordable and convenient healthy meals just a call away